Prev Do I have asthma or COVID-19?

Launching the next generation of cancer-fighting weapons

Next What are the long-term effects of COVID-19? 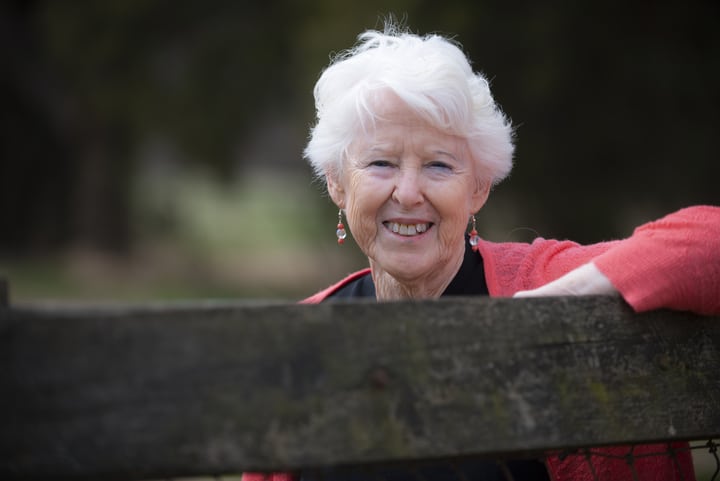 This article was first published in the spring 2021 issue of UofL Magazine .

When options for treating her cancer seemed to be exhausted and doctors said she did not have long to live, Valerie Snapp enrolled in a clinical trial at UofL Health – Brown Cancer Center for an innovative immunotherapy known as TILs. The therapy helped her own immune system fight the cancer and she is now cancer-free. TILs is one of several promising immunotherapies available through clinical trials at the Brown Cancer Center.

First diagnosed with a rare mucosal melanoma in her sinuses 11 years ago, Nashville resident Valerie Snapp was cancer-free for five years after surgery and radiation. But the cancer came back. An immunotherapy drug worked for a time before it, too, failed. A vaccine therapy would take too long for her, doctors said, and she was turned down for a clinical trial at another center. Her cancer was considered incurable and she was told she had only months to live.

Although her treatment options dwindled, her hope did not. She reached out to Jason Chesney, M.D., Ph.D., director of UofL Health – Brown Cancer Center. Chesney asked her to come to Louisville to be evaluated for a clinical trial of an immunotherapy known as tumor infiltrating lymphocytes (TILs) that would engage her own immune system to fight the cancer.

“He told me all the pros and cons and I said, ‘I’ll tell you right now I want in,’” Snapp said.

Now, more than a year after her treatment, scans show she is cancer-free.

The Brown Cancer Center is one of a very limited number of cancer centers in the United States offering experimental adoptive cell therapies, immunotherapy that uses cells from the patient, such as the TILs Snapp received, to fight their cancer.

Cancer deaths in the United States have declined by 31 percent since 1991, according to the National Cancer Institute, thanks to improvements in prevention, detection and treatment. Immunotherapies are some of the most promising new treatments.

“The death rate from cancer has dropped dramatically in the U.S. in recent years in no small part due to the success of immunotherapy in lung cancer and melanoma,” said Michael Egger, assistant professor and surgical oncologist.

The doctors at UofL have learned that immunotherapies not only can be effective when other types of treatments fail, but when they are successful, they result in more durable responses against the cancer.

“While we have made significant progress against cancer, it remains a major cause of death in the United States. Our goal is to reduce the cancer death rate by another 25 percent in the next five years,” Chesney said. “We believe that we can meet this goal through our comprehensive, multidisciplinary clinics focused on a single type of cancer, as well as the development of novel immunotherapies such as TILs and CAR T-cell therapy, which are part of our clinical trials program at the Brown Cancer Center.”

For TILs treatment, a segment of the patient’s tumor first must be removed and immune cells called T cells are isolated from the tumor. The T cells are activated, expanded and then infused back into the patient where they seek out and destroy the tumor cells.

Before the activated T cells can be reinfused, however, the patient must undergo chemotherapy to prepare the body for the new cancer-specific immune cells. Following the infusion of the immune cells, the patient receives a powerful immune boosting treatment, Interleuken 2. In some respects, treatment with TILs is similar to a bone marrow transplant. Both procedures are performed at the Blood Cancers, Cellular Therapy and Transplant Program unit at UofL Health – UofL Hospital.

“That was a very rough three weeks,” Snapp admitted. “But I got over it and I am now cancer-free. It has been several months since my first clean scan.”

Snapp says she is feeling well and now is living a normal life. As she walks her dog every morning, she stops at a corner near her home that borders a large farm and counts her blessings.

“I look out over the farm and it is so beautiful. I think how blessed I am to be able to be here to see this. How many people have been told they wouldn’t be here for long and have not had the chance I have had? I’ve had wonderful doctors, wonderful care and they wouldn’t quit. If Dr. Chesney had not fought for me to be in the clinical trial, I wouldn’t be here today,” Snapp said.

Currently available only in clinical trials, TILs have been used for melanoma for more than a decade, and more recently in trials for head and neck, cervical and lung cancers. TILs are expected to receive Food and Drug Administration approval for treatment of melanoma and cervical cancers within the next year.

For CAR T-cell therapies, immune T cells are extracted from the patient’s blood and are genetically modified to more effectively fight the patient’s cancer. The modified cells are infused back into the patient where it is hoped they will fight the cancer and create long-term immunity to its recurrence. The manufacture of CAR T cells requires specialized clean rooms known as Good Manufacturing Practice (GMP) laboratories to ensure a sterile and controlled environment for the cells. Two of these laboratories are in place at UofL.

“We are already producing CAR T cells in the lab for a clinical trial with Stony Brook University Hospital targeting certain leukemias and lymphomas. The first two patients have been dosed with the engineered T cells and are doing very well,” said Robert Emmons, M.D., director of the Dunbar CAR T-cell lab. “We anticipate further protocols for CAR T therapy in acute lymphocytic leukemia, acute myeloid leukemia, myeloma, pediatric neuroblastoma and certain solid tumors to be in place at UofL later this year,” Emmons said.

CAR T-cell therapy is FDA approved for treating patients with B-cell acute lymphoblastic leukemia and a form of a B-cell (non-Hodgkin) lymphoma, but the cells can be customized to attack any protein on the surface of a cancer cell, giving it the potential to be effective in many types of cancer.

“So far, CAR T cells have been most successful in blood cancers – leukemias and lymphomas,” said Rebecca Redman, deputy director of clinical research at Brown Cancer Center. “But now that we have the lab manufacturing the cells here, the hope is that we can start to look at CAR T cells that may work in solid tumors and try to expand on how those are being used.”

Researchers who refuse to yield

Celebrating its 40th anniversary this year, the Brown Cancer Center has long been a factor in furthering cancer research and contributing to the search for a thus-far elusive cure. UofL’s immunotherapy trials, however, are proving to lead to stronger, more sustainable treatments.

The facilities and expertise of scientists who conduct basic and translational research at UofL are essential to support clinical trials for the latest advances. The Division of Immunotherapy in the Department of Surgery is a research-oriented division focused on learning more about these types of treatment.

“We frequently work with basic science researchers to develop new treatments or look at patterns of resistance to figure out how we can design clinical trials or share observations about what we are seeing in the clinic,” Rebecca Redman, M.D., director of clinical research, said.

Michael Egger, M.D. is working on a clinical trial to test new methods for using immunotherapy to treat melanoma, hoping ultimately to eliminate the need for surgery when melanoma has spread to the lymph nodes. For this trial, he shares tissue samples from patients with scientists in the UofL Center for Cancer Immunology and Immunotherapy (CCII) for testing.

“We need to evaluate these cells to see how well the T cells are responding to the immunotherapy before, during and after surgery to understand why it may work and who would benefit from this type of therapy,” Egger said.

The CCII, led by Chesney and Yan, was created in 2020 to develop and improve cancer immunotherapies and support clinical trials at the Brown Cancer Center. The CCII was awarded $11.5 million from the National Institutes of Health to help young and established researchers in the cancer immunotherapy field with funding, mentorship and equipment as a Center of Biomedical Research Excellence. This on-site research support can lead to better outcomes for patients with rare and incurable cancers.

“For some patients, their treatment may be very straightforward. But for others, the standard treatment may not be satisfactory,” Egger said. “Having access to the clinical trials and the researchers that drive that kind of innovation can make a difference in the success of their treatment.”

While so far, many immunotherapy clinical trials have been open only to individuals with cancer that is considered incurable, these treatments soon should be available for patients with less advanced disease.

“Not only is it prolonging the lives of people with incurable cancers, but given its success in those patients, these therapies are moving into curable-stage patients in hopes of preventing their tumors from ever coming back in the first place,” Redman said.

“What’s next? The sky is the limit,” Egger said. “We are all trying immunotherapy in every type of cancer to understand its promise and its limitations. It may never replace chemotherapy, but when you have a response to immunotherapy, it is usually very durable, leading to longer times before cancer recurrence, or even a cure.”