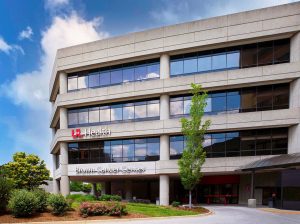 For patients with cancer, receiving the best care is paramount. At UofL Health -- Brown Cancer Center, patients have been receiving quality health care services for 40 years.

Our mission is to generate new knowledge relating to the nature of cancer, and to create new and more effective approaches to prevention, diagnosis and therapy while delivering medical advances with compassion and respect to cancer patients throughout our region.

For patients in Kentuckiana and beyond, Brown Cancer Center offers innovative treatments to help patients fight the disease while still living each moment to the fullest. Our cancer detection and prevention programs are helping individuals in our community learn more about their risk factors, the disease and the importance of early intervention.

As part of UofL Health and an academic medical center, in partnership with the UofL School of Medicine and UofL Physicians, Brown Cancer Center offers our patients state-of-the-art facilities, groundbreaking research, pioneering treatments, as well as access to more than 700 specialty and primary care physicians. 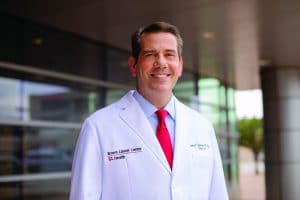 Dr. Jason Chesney is a practicing medical oncologist, laboratory researcher and clinical trialist who serves as the Director and Chief Administrative Officer of the Brown Cancer Center/Oncology Service Line. He has served as the director since 2017. Dr. Chesney leads the center’s comprehensive multidisciplinary cancer clinics, cancer trials and outreach programs and basic and translational research efforts.

Under Dr. Chesney’s leadership, the Brown Cancer Center’s Cancer Trials Program has developed a national reputation for the testing of novel immunotherapies. Dr. Chesney is an inventor on nine U.S. patents for new cancer therapies and his laboratory research has resulted in two ongoing Phase I clinical trials of novel cancer drugs that are currently available to advanced cancer patients. In 2014, Dr. Chesney’s clinical research team and a second team from Memorial Sloan Kettering Cancer Center were the top two clinical groups worldwide to find that the combination of ipilimumab with another immune checkpoint inhibitor, nivolumab, was the most effective immunotherapy regimen ever developed for cancer patients.

Over the past 10 years, Dr. Chesney’s research group has discovered the roles of several metabolic enzymes in the development and progression of lung cancer, including 6-phosphofructo-2-kinase 3, choline kinase and cytochrome c oxidase. These new metabolic targets are being interrogated for their utility in the development of new drugs to treat not only lung cancer but also other types of cancer. Dr. Chesney also has been at the forefront of understanding the metabolic effects of cancer-driving genes including Ras, the estrogen receptor and the epidermal growth factor receptor.

An internationally requested speaker, Dr. Chesney has made research presentations in countries including China and Belguim, as well as throughout the United States. He has authored more than 75 scientific papers appearing in leading journals such as the Proceedings of the National Academy of Sciences, Nature Communications and the Journal of Biological Chemistry.

Active in professional organizations, Dr. Chesney is a member of the American Association for Cancer Research, the American Society of Clinical Oncology and a standing member of the National Cancer Institute’s Tumor Cell Biology Study Section. Additionally, he has either chaired or served as a reviewer on a multitude of study sections both within the National Cancer Institute and other national research organizations. He also serves as a reviewer for peer-reviewed journals including Nature Medicine, Cancer Cell, Journal of Clinical Investigation and PLOS One.

He has received multiple awards including the Kentucky Derby’s Julep Ball Scientist of the Year and been named a U.S. News World and Report Top Doctor in Solid Tumors and Clinical Trials.

More than 10,000 people a year die from cancer in Kentucky, where the disease has the highest mortality rate in the nation. Experts say the biggest issue is lung cancer, which strikes Kentuckians at a rate 50 percent higher than the national average. Death rates for breast, colorectal and cervical cancers in Kentucky also rank in the top 10 nationally.

To help relieve the suffering of the state’s residents caused by cancer, the Brown Cancer Center was opened in 1981 with a $12 million gift from the James Graham Brown Foundation and the citizens of Louisville.

In 1999, John Shumaker, then president of the university, made a commitment to creating a center that would improve cancer care in the region and become one of the nation’s preeminent cancer centers. The belief was - and continues to be - that the citizens of Kentucky deserve world-class cancer treatment, and no resident should feel compelled to leave Kentucky to seek the best level of care.

Since 1999, the Brown Cancer Center has enjoyed a period of remarkable growth in its clinical and research programs with strong, multidisciplinary programs providing a team-focused approach to cancer care. These programs have been extended into several communities throughout the state in an emphasis on providing outreach to underserved populations.

The state-funded Kentucky Cancer Program has become a national leader in providing cancer education. This premier state-funded cancer prevention education program is based at the Brown Cancer Center and the University of Kentucky’s Markey Cancer Center. Through a network of 12 regional offices, the KCP’s services and programs are available in all parts of Kentucky. Each office is run by a cancer control specialist, who is a catalyst for change in his or her region.

Since 1999, the Brown Cancer Center has pursued a strategic plan for the development of strong translational research, focused particularly on drug discovery and development.

The plan and recruitment of new faculty places emphasis on investigational areas that will lead to new approaches to the prevention, diagnosis and treatment of cancer. This emphasis is paying off, as scientists with the Brown Cancer Center have several novel treatments in early phase clinical trials with more than a dozen others in preclinical stages.

Support for the center

The growth of the Brown Cancer Center has been made possible with strong University of Louisville and philanthropic support. The development of the Kentucky Research Challenge Trust Fund , known as “Bucks for Brains,” has played an important role in providing funds for the recruitment of talented investigators, creating 22 new endowed chairs.

Support from the James Graham Brown Foundation, the Humana Foundation and Kentucky Lung Cancer Research Fund also has provided resources critical to the Brown Cancer Center’s growth. This has resulted in nationally recognized research programs that have direct implications for cancer patients in Kentucky.

Research grants have grown from around $1 million in 1999 to more than $50 million in 2011. Because of the specific needs of the state and region, the center has targeted tobacco-related cancers as a major focus and is exploring several promising approaches.

Today, the Brown Cancer Center continues to be a leader in the treatment of cancer.